Me and My Mandolin 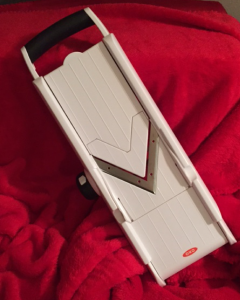 My gene pool has a broken link when it comes to inspired cooking, although I do try to give my meals some spark occasionally. One night, I had the ingenious idea to use carrot disks instead of carrot chunks in my soup. (I know, this is imaginatively a rather puny idea!) You see, I had a package of variegated carrots—purple, yellow, orange—and I felt disks would make my dinner appear a bit more artistic.

Pulling out my Mandolin and grabbing three carrots, I set the depth of the cutting edge, grabbed a purple carrot and began that rhythmic slicing action. I was pleased with the look of those disks and chose a pale yellow carrot next. Humming away as I refined my slicing action, I stopped abruptly when I felt a sting.

Looking down, I saw copious amounts of blood spewing from thumb to hand to counter. I wondered, for one brief moment, if there were any hemophilia in my family history. Like a scientist, I studied the wound as I attempted to staunch the blood. Wow! I thought. This looks like a major cut; it looks like I have almost sawed off the end of my thumb; this is truly a loosely attached piece of flesh; oh my, oh my!!

By nature, I am inclined toward self-medication; so, I grabbed a Viva towel and some masking tape to create an absorbent bandage (gauze & medical tape were too prosaic for this task). The first bandage looked a bit pathetic and the second one was only slightly better but I did contain the bleeding. Then, I held my thumb and said “Spirit, my thumb is healed and it is perfect.”

Why do I chatter on so long about what was a foolish action? I knew that a mandolin needed to be treated with respect and I knew that it could do great damage, but I went ahead, thinking that I was somehow exempt from the Law.

As I stood there holding my throbbing thumb, I wondered just how many examples I needed before I “knew” that the Law always works…ALWAYS. It does not care whether you are ignorant, innocent or foolish—it works! By the same token, my word, released to Law, works.

But, I got a “twofer” demonstration. The lump of flesh hanging onto my body by a mere thread, covered the new tissue growing beneath it and sloughed off gradually. The end result….a thumb that reflected my prayer. Healed it was and Perfect it was. Yes, I had a masterful little lesson in prayer, healing, and a knowingness that my body restores to its Divine blueprint.