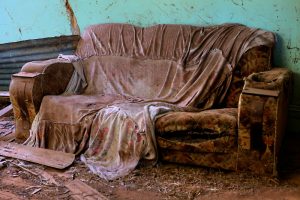 Lately, my path has been strewn with sofas and chairs. Occasionally, I see a few mattresses lolling about, but normally my eyes catch on the sofas. Perplexed and more than a bit curious, I wondered if furniture was “trending in” as landscape architecture! I figure that sofas are home furnishings but I’m not one to question the latest in cultural shifts. Hmmmm, this new exterior design feature does lend itself to conversation.

A few weeks ago, I was driving down Reed Street. Squeaking through on an amber light, I noticed a wing back chair dressed in rust naugahyde, adorned with precisely placed brass tacks. It sat, rather elegantly, on the sidewalk ramp leading to the street itself. It was waiting patiently, I would guess, for the traffic to stop so that it could leave the elementary school behind and head home.

About 10 blocks later, I spied a white rolled arm armchair listing a bit despondently toward both a tree and a dumpster. A bit disheveled, it gave evidence of not being quite ready to give up its usefulness. (I think it was trying to right itself!)

And, several days ago, I saw a sofa that quite grabbed my attention. It was hugging the fence as though it wanted desperately to continue its engagement with life. Like the armchair and every other form, it was trying to resist its evolution back to Spirit! In some ways, the sofa was reminiscent of my Dad—struggling every step of the way to remain as matter, as form.

In any event, I do interact with the sad remnants of matter well on their way toward disintegration with quite some curiosity. It does not matter if I am walking or driving for I will see each and every sofa, chair or mattress. Cushions might be missing, backs stained with the grease of a multitude of heads, upholstery ripped and torn, spines broken. Surely, these brocade or duck or chintz sofas and chairs were so appreciated at some time in their lives.

Well, I guess that the best that I can do is thank them for serving. Most of all, I want them to know that they were “seen” by me.