Season of Joy in Disguise 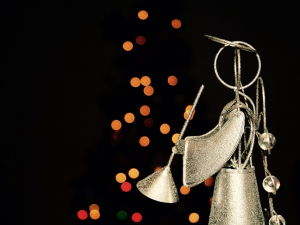 I was reminiscing last week about the variety in my holiday celebrations after having watched several Christmas movies. Mine have been nothing like the cinematic versions; that is, snow and sleighs have not figured prominently nor have glittering receptions, parties and performances. Instead, they have been very, very human in their stress, clumsiness and moments of grace.

There was the year that I believed my good lay in international reciprocity since I lived in Hawaii. So, in one thoughtless moment, I invited six Japanese students to my apartment to experience a typical “American” Christmas dinner. Although not a willing cook, I put together a reasonable facsimile of a turkey dinner. We gathered self-consciously at the table. Very shortly, I became aware that this dinner was a “bust”! The students studied each miniscule bit of food on their forks, tasted it and quietly put the remainder back on their plates. It even appeared as though the gag reflex had joined our meal. In one last effort to put a little sparkle in the meal, I reached for the scotch. That divine message of “bring out the scotch” saved the dinner from disaster and turned it into a cross-cultural “event” of warmth, conversation and tipsiness.

There are also those holidays where traditional flies out the window and you find yourself doing something that becomes a “peak” memory. One year, eight of us, who really knew little more than each other’s names, gathered at a small cabin. We built a fire and went cross-country skiing on the nearby golf course while the food heated up. Shortly, strangers became friends as we pulled each other out of snowbanks, threw snowballs and balanced cautiously on mini-hills that we thought were mountains. Laughter, connection, and exercise. What an experience!

Of course I also had the years of the traditional and the “everyone pitch in” dinners but it has been the unusual which always come to mind. I have yet to discover the “key” to the perfect holiday combination of people, events, and locations. What I do believe, though, is that any holiday becomes perfect when we are in gratitude for whatever shows up. At that moment, grace touches us.